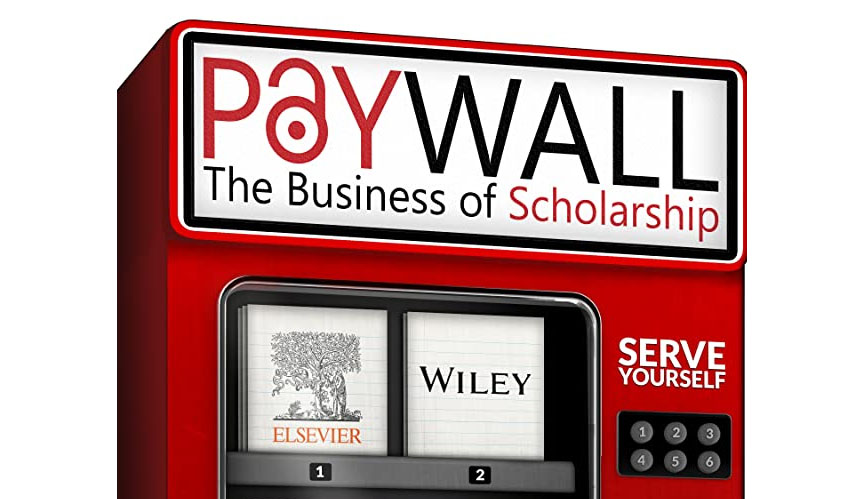 We’re excited to share an exclusive interview with Jason Schmitt. Aside from directing Paywall, Jason is a journalist and Chair of the Department of Communication, Media and Design at Clarkson University. Join us on 20 October for a virtual screening of this fascinating documentary.

What originally motivated you to make Paywall: The Business of Scholarship?

I saw first-hand the injustice of access to science, broadly speaking. Western institutions have access while Global South researchers were deprived. That in my mind is exactly what academics are generally against: a have / have not relationship.

Beyond making regions voiceless, key ‘high-impact’ academic scholarship is absurd. There is no reason why university systems need to pay tens of millions of dollars per year when we have digital networks which can diffuse content globally for free. The researchers in our system don't get paid. The reviewers don't get paid. The academic editors (generally) don't get paid. Yet we are paying obscene prices to a for-profit company system that is not needed or relevant for this period of time.

The film has had 400 public screenings at institutions around the globe and an audience of over 250,000 have viewed the film. Are you pleased with the film’s reception? Do you feel that the film has had an impact on debates around scholarly publishing?

I think the film provided a narrative about the need of an OA movement. And from that, I am pleased. For decades the OA push has existed but it was (and still is to some degree) discombobulated. In 1991 Steven Harnad in his ‘Subversive Proposal’ made the plea for open access to scholarship. In 2001 The Budapest Open Access Initiative convened. It's been a long progression. We aren't winning expedited change awards cumulatively.

Slowly I believe society is catching on (and pressuring) academic institutions to finally take a stand about access to research. I have been happy over the last two years to see strong pushes from philanthropists and funders to require OA outputs. I've been happy to see the creation and dissemination of Plan S as a way to further the conversation and directions.

For many years I've said I felt like I was on the United States of America science apology tour, since the US was lagging far behind Europe in OA mandates. I am happy that over the last year the US has stepped up its OA push with the UC System in California stopping Elsevier subscriptions saving $10,000,000 a year, as well as the SUNY System in New York following suit and saving $7,000,000 a year on Elsevier subscriptions.

So, yes, I believe I've seen some changes starting to right the ship.

You are an academic yourself. How do you engage with open access in relation to your own research work and what benefits does this have?

I make 100% of my research outputs CC BY 4.0 because, at the end of the day, I want to have the biggest impact I can for my work and time I have on planet earth.

The film references the famous 1995 article by John Hayes in Forbes magazine which predicted that scholarly publishing would be the internet’s first victim and explores some of the reasons why that didn’t come to pass. It is now two years since Paywall was made. What progress do you think has been made since the film was made and what challenges still remain?

That 1995 Forbes article really isn't very famous. Actually, hardly anyone I knew was aware of the article. I had to make a copy of the article on a Scribd page online so I could share the article in pieces I've written.

I think we first and foremost need to educate tenure review committees on the importance (and prestige) of OA scholarship. That is the number one force impeding progress in my mind. I've done a ton of public talks on OA, and you know who comes to the talks? Librarians.

Academics and researchers are seldom at the talks for OA changes. They are focused on their research output and pursuit. And in doing so are standing on the shoulders of those who came before in their discipline. And that creates a very slow system to change.

OA week 2020 should be entitled ‘Open Access with a mask on!’ And it should focus on the fact that after October 28 Elsevier will stop providing the majority of content on infectious diseases and virology for global researchers because they have decided they need that small extra profit more than the globe needs access to those concepts.

And we, as academics and institutions are OK with that decision evidently because we will continue to support Elsevier with our budgets and research output.

What key things would you say to an academic colleague who remains unconvinced about engaging with open access?

We create research and scientific output to have an impact. We are not compensated for the research activity. And, to get the largest impact we want to have the most eyes possible see, read and use our research. From that vantage point, OA should be the default for all academic output. It is a way to have a bigger impact.

Sign up for the screening of Paywall, including a Q&A with Karen Veitch and Roger Fairman to discuss the important issues raised in the film.