A fly with skates

This is the final story interpreted by one of our work placement students, Zyginta Juskute. Winter is turning to spring... 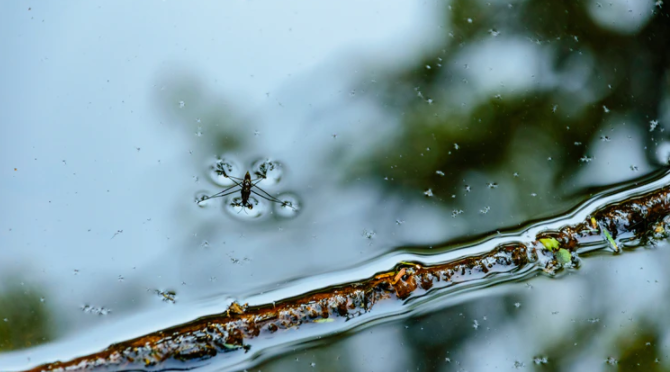 And then there was winter. But in the mid-February it suddenly warmed up, the snow melted off the ground, and the sun lured outside everyone who could crawl and fly. Two moths came out of their hiding place under the bounced bark of a tree and began to flutter their wings, and a sleepy Fly crawled out of its cosy apartment between the walls of a sauna.

After she yawned and stretched, the Fly felt very thirsty:

"I'll have a drink," she thought and buzzed to the middle of the pond.

The Fly doesn’t need much, so she quickly quenched the thirst. But then – boom! She slipped on all of her six fly legs and stretched out on the ice.

“Oh, and what do we have here?” she shouted surprisingly.

And then the Fly started remembering how in summer, she was jealous of the water striders skating on the pond. Once she even tried to imitate them. She plunged into the water and tried to stay on the surface. But she only got her wings wet! So she swam to some water grass, climbed on it and trembled in the cold until her wings dried in the sun.

"Strange - the water now is solid, completely different than in summer," The Fly thought. "Maybe now I could skate too?"

She tried again. And just like the last time – she slipped to the side. No, something is still missing...

The Fly got up and accidentally stepped one of the pine needles, who were scattered all over the ice. She squeaked as she slid almost to the other shore!

"Huh, so that’s how it works!" She thought, applying a spike to each leg, like a skate. Skating was a success now. Water striders had nothing on her now!

The Fly skated until she ran out of breath and came home exhausted. She carefully leaned the skates against the wall, dreaming of how she will skate again after eating a big portion from her autumn stocks and getting a good night’s sleep. She will be light and graceful - like a feather!

But as she was sleeping, the weather got colder and it started to snow. The Fly sank so deep into the sleep that she woke up only when the coltsfoot bloomed... The pond was full of water again. For a second, The Fly thought that she simply dreamed everything, but then she noticed the skates that were leaning against the wall...

A friend who came to her for an afternoon tea was confused.

“Why did you bring all those pine needles here?”

“What needles?” The Fly was surprised. “Oh, they’re my skates! You have no idea how I skated with them in the winter. You know, when the water turned into ice...”

The friend just rolled her eyes and thought, “Well, well... What happened to her? Maybe she spent too much time in the sun... Water turning into ice, skates – such nonsense!”